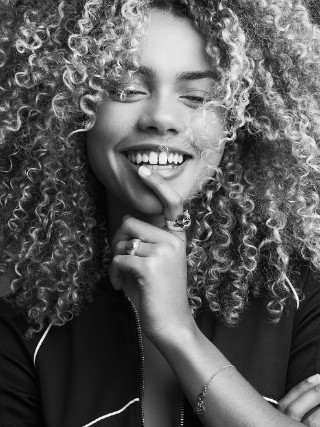 Ocean Lewis, a British model, athlete, and illustrator, started garnering attention on social media when she was just seventeen, which lead to a shoot with Adidas and a burgeoning multidisciplinary career. A sprint athlete, she trains with coach Chris Zhah several times a week at a track in London, and is also a soccer player. She was featured in a profile by British Vogue that illuminated her hair routine and her training to become a professional track star, and has been in campaigns for several brands including Nike, Tommy Hilfiger, Calvin Klein, Kenzo, and Adidas. Her luxurious burst of buoyant curls has been talked about repeatedly, she says it requires little upkeep, and she’s done interviews for Kérastase and Ouai, which she manages to fit in while training tirelessly on the track towards winning a gold medal at the Olympics.